Remember click the link to register for your personal invite to live recordings of NDG!

Doublin' Down with Bryan Fuller 134

Bryan Fuller comes on this week to talk about everything. His new custom paint shop, for your ride. His TV Shows Car FIx and Caffeine and Octane. His new shop, in an old Ferrari Dealership. HIs cars being redesigned in Forza by his son. The Futuristic...

Bryan Fuller comes on this week to talk about everything. His new custom paint shop, for your ride. His TV Shows Car FIx and Caffeine and Octane. His new shop, in an old Ferrari Dealership. HIs cars being redesigned in Forza by his son. The Futuristic 2029 and all its 3D printing. Museums. Lincoln Conntenitals. The next generation of builders. It's all here. 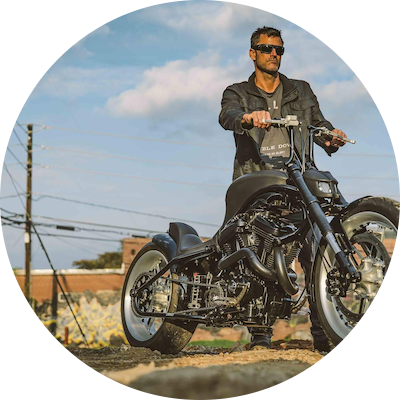 Bryan Fuller is a Master Builder, Designer, TV Personality and Author of how-to-build books through his own publishing company, Full-Bore Publishing.

Bryan realized his passion for cars as an eighth grader while helping his dad rebuild a 1965 Ford Mustang. In High School he built two cars of his own, including a souped-up 1930 Ford Model A with a Chevy 327 V8 engine. At the time he considered building cars just a hobby and went on to college, earning a biology degree with the hopes of becoming a chiropractor. However, the unforeseen death of his father while at the early age of 20 changed all that. Bryan grew determined not to waste his life doing something he didn’t absolutely love and and instead set out to make his passion his career.

After gradating from University of North Texas, Bryan enrolled at Wyoming Technical Institute where he learned advanced technical skills that helped shape him into the fabricator he is today. Drawn in by the west-coast car culture, after school Bryan moved to California and began a two-year apprenticeship with So-Cal Speed Shop. In 2003, he was hired by renowned artist, designer and fabricator, Chip Foose. While working for Foose, Fuller helped the team win the Riddler Award for Best Car in Show at the Detroit Autorama in 2003 and 2005. Bryan also began his TV career at that time, with appearances on 10 episodes of "Overhaulin’" and several episodes of "Rides".

In 2005, Bryan decided to set up his own shop and moved to downtown Atlanta, where his wife had family. Having been born in Jacksonville, Texas, Bryan stayed true to his roots, naming his first Atlanta based build the “Texas T”. That year, he competed and placed 4th place overall at the AMD World Championship of Bike Building for Freestyle. He then won the coveted GM Design Award in 2010 at The SEMA Car Show with the “Impaler” and the 2013 Birmingham World of Wheels Best in Show with a one-of-a-kind Cadillac hearse, named the “Thundertaker”. During this time, Bryan continued his TV career as host of "Two Guys Garage" and made several appearances designing and competing with his own designs on episodes of "Biker Build-off" and "Cafe Racer TV". Bryan also hosted "Naked Speed" on the Velocity Channel, a show dedicated to the design, build and ride of unique custom motorcycles.

He is a host on the NEW season of "Car Fix" on the MotorTrend network, the ultimate "how-to" series. He also hosts the TV series "Caffeine and Octane", which highlights the culture and community of the largest monthly gathering of of auto enthusiasts in the USA. This TV Series is currently in its fifth season on NBC Sports Network. In addition, Bryan is the co-author of a series of how-to-build books, “Full-Bore Welding” and "Full-Bore Sheet Metal" published by his own publishing company, Full-Bore Publishing. Alongside his writing partner, Mark Prosser, Bryan also shares tips and tricks via videos and workshops throughout the country. Bryan and the Fuller Moto team specialize in unique custom car and motorcycle builds. The shop motto - "Dream Big, Build Strong, Ride Hard!"

Get your invite to recordings of NDG! Get a Swag Bag! Get entered to win*, monthly!

Email has been submitted.